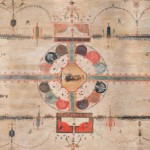 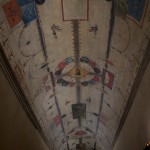 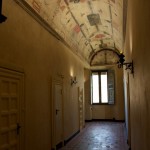 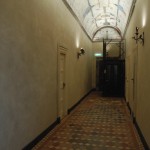 One of the latest discoveries regarding the decoration of the Villa Farnesina is represented by the “grotesque” motifs that complement some of the scenes depicted in the Villa’s frescoes. The “grotesques” owe their name to the accidental discovery of the famous “Domus Aurea”, in the last quarter of the 15th century, when a young Roman fell into a crevice in the Colle Oppio and found himself in a grotto covered with painted scenes: it was emperor Nero’s lavish Palace, the Golden House that he had built between 64 and 68 AD between the Esquiline and Celio hills. Several young Renaissance artists soon rushed to descend in the caves to see those amazing paintings with their own eyes: Pinturicchio, Michelangelo and Raphael were among them. Since then, and especially after the famous ‘Logge’ that Raphael had painted in the Vatican between 1517 and 1519, grotesque decoration quickly became a widespread artistic fashion. During the 16th century this form of after-the-antique taste (the ‘imitatio antiquitatis’) was criticized by Vasari, who labelled the paintings as «licentious and indeed ridiculous». Grotesque decoration actually denies space, with crossbreed creatures and monsters portrayed as thin and fanciful figurines that intertwine in geometric and naturalistic ornamentations against a white or monochrome background. The bright colours of the design also enhance geometric effects with thick, cramped patterns. In the seventh book of his treatise “De Architectura”, Vitruvius – the architect and theorist of the Augustan age – strongly disapproved of these ornaments, seen as absurd and illogical; doing so, however, he also censored a fashion typical of the wonderful decorations of the Third Pompeian style and that was indeed to find its peak in the Golden House of Nero around the mid-1st century AD. Vitruvius’ teachings were held in high regard both by the architect Baldassare Peruzzi and his patron Agostino Chigi; maybe that is why grotesques are seldom found in the decoration of the Farnesina. Actually, only a few simple and elegant “candelabra” patterns frame the Triumph of Galatea and demarcate the space between the other paintings of the Loggia. Other grotesques (perhaps painted by Polidoro Caldara da Caravaggio), much richer and bizarre, with gilt parts and bright colours, cameos and ox skulls, decorate the ceiling of the room of Alexander and Roxane, frescoed by Giovanni Antonio Bazzi, called “il Sodoma”. More grotesques, however, appear in this small Gallery. Indeed, this charming passageway that connected the Hall of the Perspective Views with the rooms of Francesca Ordeaschi and her children is covered by a wooden barrel vault that, as if it was a frescoed ceiling, is decorated with delicate grotesques on a white background. Similar to those Raphael had painted in 1516 in the Loggetta of Cardinal Bibbiena of the Palazzo Apostolico, they date back to 1517-1518 and were therefore completed shortly after the frescoes of the Hall of the Perspective Views. The marks of a ceiling’s coffers are still visible near the lift; they belong to a phase when the gallery, divided into three areas, was used as a chapel, as documented by a 1560 map. Most of the decorations date back to the restoration of the years 1861-1863, a period when, in the long-lasting wake of the discoveries of Herculaneum and Pompeii, grotesque decoration experienced a widespread revival. The lunettes above the window and on top of the door that leads into the Hall of the Perspective are the result of an intervention dating back to the 1930s. After a first tutorial stage, carried out by a team of students of the ISCR School of Advanced Education, restoration work was undertaken by restorers trained at the ISCR (Consorzio Recro) with the financial support of the Isabel und Balz Baechi Stiftung of Zürich for the protection of wall paintings.