The Loggia of Galatea 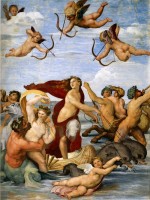 The Loggia takes its name from the nymph Galatea frescoed by Raphael. Deep purple scales fall away like soft aquatic leaves from the flanks of the saffron coloured body of the bright handed triton, while his fiery face emerges from a mesh of algae; behind, the nymph’s back is nacreous and quivering. On the left the nude Nereid holds a burnished golden drape over her head in a classical gesture, which contrasts with the burnt tones of the hirsute triton.

The Loggia of Galatea is frescoed by various artists. The first was Peruzzi, who in 1511 designed Agostino Chigi’s horoscope. In the winter of 1511-1512 Sebastiano del Piombo, one of the most talented artists from Venice, painted the mythological scenes, taken from Ovid’s Metamorphoses, in the lunettes. The last of them is a monochrome painting of a daringly foreshortened large head of a young man, previously attributed to Michelangelo thanks to a well-known legend. It was said that he drew it as a competitive “prank” while he was waiting for the commissioned artist, Raphael, who was momentarily absent. 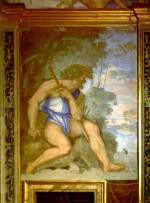 Sebastiano del Piombo painted Polyphemus, the Cyclop in love with the beautiful nymph, originally frescoed naked and afterwards covered by a light blue dress, while Raphael, referring to the same legend, painted the elegant figure of Galatea on the same wall. Galatea was the beautiful nymph whom Raphael depicted amongst a throng of sea creatures as she speeds away from her admirer on a fantastical shell drawn by dolphins.

The decoration of the wall panels was left unfinished in Agostino’s time; then in the seventeenth century it was completed with decorative landscapes, which have been attributed to Dughet.

To see Raphael’s other works go to the Vatican Museum’s website.