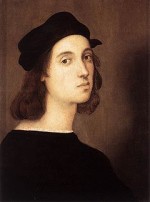 Not long after this, Agostino Chigi, a very rich merchant of Siena, who was much the friend of every man of excellence, gave Raffaello the commission to paint a chapel; and this he did because a short time before Raffaello had painted for him in his softest manner, in a loggia of his palace, now called the Chigi, in the Trastevere, a Galatea in a car on the sea drawn by two dolphins, and surrounded by Tritons and many sea-gods.

Raffaello was a very amorous person, delighting much in women, and ever ready to serve them; which was the reason that, in the pursuit of his carnal pleasures, he found his friends more complacent 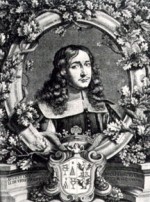 and indulgent towards him than perchance was right. Wherefore, when his dear friend Agostino Chigi commissioned him to paint the first loggia in his palace, Raffaello was not able to give much attention to his work, on account of the love that he had for his mistress; at which Agostino fell into such despair, that he so contrived by means of others, by himself, and in other ways, as to bring it about, although only with difficulty, that this lady should come to live continually with Raffaello in that part of the house where he was working; and in this manner the work was brought to completion. For this work he made all the cartoons, and he colored many of the figures in fresco with his own hand. And on the ceiling he made the Council of the Gods in Heaven, wherein, in the forms of the Gods, are seen many vestments and lineaments copied from the antique, and executed with very beautiful grace and draughtsmanship. In like manner he made the Marriage of Psyche, with ministers serving Jove, and the Graces scattering flowers over the table. In the spandrels of the vaulting he executed many scenes, in one of which is Mercury with his flute, who, as he flies, has all the appearance of descending from Heaven; and in another is Jove with an air of celestial dignity, kissing Ganymede; and in another, likewise, lower down, is the Car of Venus, and the Graces, with Mercury, drawing Psyche up to Heaven; with many other scenes from the poets in the other spandrels. And in the spherical triangles of the vaulting above the arches, between the spandrels, are many most beautiful little boys in foreshortening, hovering in the air and carrying all the instruments of the gods; Jove’s lightnings and thunderbolts, the helmet, sword, and shield of Mars, Vulcan’s hammers, the club and lion skin of Hercules, the caduceus of Mercury, Pan’s pipes, and the agricultural rakes of Vertumnus. All are accompanied by animals appropriate to their character; and the whole work, both as picture and as poem, is truly beautiful. Round these scenes he caused Giovanni da Udine to make a border of all kinds of flowers, foliage, and fruits, in festoons, which are as beautiful as they could be.